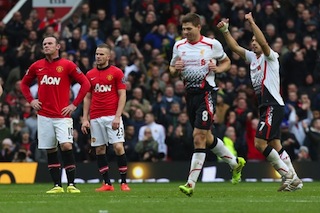 Manchester United lose to Liverpool in the league

January 5 – Swansea win at Old Trafford for the first time, sending United out of the FA Cup at the third-round stage for only the second time in 30 years.

January 7 – Defeat in Capital One Cup semi-final first leg at Sunderland means a third straight loss for the first time since May 2001.

February 1 – Stoke end their long wait for a win against United. Charlie Adam’s double gives them their first since 1984.

February 7: Veteran Serbian defender Nemanja Vidic announces he will leave United at the end of the season.

February 9 – United come from behind to lead bottom side Fulham at Old Trafford, but Darren Bent’s stoppage-time equaliser grabs a 2-2 draw. Moyes describes the result as being “as bad as it gets”.

February 25: In the Champions League last 16, United lose 2-0 at Olympiakos in Greece.

March 25: United lose 3-0 at home to Manchester City. The result meant United were guaranteed to end the season with their lowest points total in Premier League history.

April 9: Despite an encouraging 1-1 draw in the first leg, United go down 3-1 to title holders Bayern Munich in the second leg of their Champions League quarter-final in Munich.

April 20: Moyes’ return to Everton becomes a nightmare. He is jeered by the crowd and United lose 2-0 — a club record 11th defeat in the Premier League. United cannot now qualify for the 2014-15 Champions League.