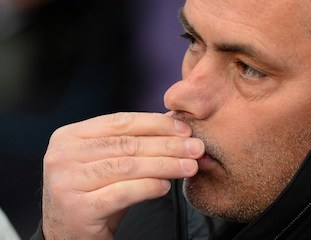 Mourinho: charged by the English FA

Chelsea manager Jose Mourinho, assistant Rui Faria and midfielder Ramires have been charged over their behaviour during their side’s loss to Sunderland last weekend, the Football Association announced on Wednesday.

Mourinho mocked match referee Mike Dean after the game, which Sunderland won 2-1 through an 82nd-minute controversial Fabio Borini penalty to condemn the Portuguese to his first ever home league defeat as Chelsea manager.

Faria was sent to the stands for angrily confronting the match officials, while Ramires appeared to strike Sunderland midfielder Sebastian Larsson in an off-the-ball incident during the first half.

“Jose Mourinho has been charged with misconduct in respect of post-match comments he made following the fixture,” read a statement on the FA website.

“It is alleged that Mourinho’s comments constitute improper conduct, in that they call into question the integrity of the referee appointed to the above fixture and/or the integrity of Mr Mike Riley, General Manager of the Professional Game Match Officials Limited, and/or the comments bring the game into disrepute.”

Speaking after the game, Mourinho told Sky Sports: “Congratulations to Mike Dean, because he made a fantastic performance.

“And congratulations to Mike Riley (head of refereeing body Professional Game Match Officials Limited), because what they did during the season was fantastic for the way the championship is going.”

Dean’s decision to award Sunderland a penalty after Cesar Azpilicueta slid in on Jozy Altidore prompted a furious reaction in the home dug-out, with Faria having to be restrained by Mourinho as he shouted at the referee.

Faria has been charged with two counts of misconduct, with the FA designating his case “a non-standard case due to the aggressive and/or threatening and/or serious nature of the reported behaviour”.

Ramires, meanwhile, has been charged with violent conduct over the incident with Larsson, in which the Brazilian midfielder appeared to swing his arm into his opponent’s face.

As Dean missed the incident, it was referred to a three-man review panel of former elite referees.

“In this case the panel were unanimous that it was an act of violent conduct,” the FA said.

Ramires has until 6pm local time on Thursday to respond to the charge, while Mourinho and Faria have until the same time on Monday.

Mourinho has had two previous run-ins with match officials this season.

He was fined and warned as to his future conduct after being sent to the stands during a 1-0 loss at Aston Villa in March, in which Ramires was sent off, and was also fined for being sent off in a game at Cardiff City in October.