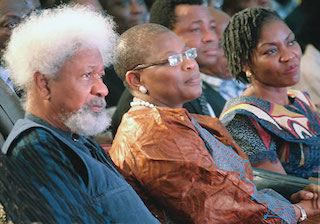 Nobel laureate, Professor Wole Soyinka,has lashed out at President Goodluck Jonathan administration for its inability to rescue the 234 female students abducted from a secondary school in Chibok, Borno State by Boko Haram.

Soyinka also criticised President Goodluck Jonathan for participating and dancing at the Kano political rally barely a few hours after the dastardly Nyanya bombing that took the lives of over 75 innocent Nigeria and abduction of over the two hundred female students from Chibok by Boko Haram gunmen.

Soyinka made his feeling known in Port Harcourt at the declaration of the State capital as the World Book Capital Wednesday.

The Nobel Laureate emphasised that though there might be hundreds of soldiers deployed to forests in Adamawa, Yobe and Boron States, the predicament of the abducted girls who are marooned in a dangerous forest at this moment, should spur the federal government to take the battle to the Boko Haram sect and rescue the abducted girls who now face the ultimate horror that confronts the country.

Soyinka wondered why the federal Government which deployed its soldiers to Mali to battle extremist groups whose agenda was to eradicate the community of learning, tolerance and peaceful cohabitation, could not do same to the Boko Haram which has declared a fatwa on enlightenment in the country.

“We must take the battle to the extremists. An army that sits in the barracks in the face of enemy attack is no army at all but a sitting duck,” he said.

He said Jonathan should have led the country in mourning following the Nyanya bombing and the abduction of the secondary schools girls, instead of embarking on a political rally which articulated priority was to expose one of his former cronies who has now turned a dissent accusing him of stealing his Presidential campaign funds.

Soyinka said; “Would you feel that this is time that a nation led by our president should be in sack cloth of ashes…let’s bear in mind that the bombing at Nyanya went beyond an harvest of body bags…this was also the dilemma of the 200 hundred children , some of whom could have been your own disappearing under violent condition.

“Would you think that perhaps in place of a dance floor, a nation’s leader should have been holding round the clock emergency meetings on the recovery of those children; mobilising the entire nation, including the encouragement of volunteers for back up duties to the military and enunciation of complete wrought of the long season of denial, the total transformation of leadership mentality in the nation.”

Also at the event, General Abdulsalami Abubakar,the former military head of state pleaded with all Nigerians to embrace peace, warning that without peace, there will be no country called Nigeria.

The Rivers State Governor and Chairman, Nigeria Governors’ Forum (NGF),Chibuike Rotimi Amaechi, said the burden end the Boko Haram insurgency in North-East part of the country, does not lie on the Nigerian military, but on education and agriculture.

Abubakar, said all Nigerians need to put hands together to sustain the peace in the country.

Amaechi said, many children, estimated by UNESCO at 10.8 million, are dropping out of school in the country due to lack of motivation.

“The reason why they are not going to school is that there is no motivation to go to school. And for me, I have said it over and over that the solution to Book Haram does not rest in the military; it lies in education and agriculture. If we start farming in the vast land of the North, all recruits of Book Haram will find alternative to Boko Haram.”

The governor stated that the state government was working to reduce the number of out-of-school children in the state, through the building and furnishing of over 500 model schools in the state.

He said; ” Here in Rivers State, we are working to bring down the number of out-of-school children. Over 500 schools have been built out of which government is currently furnishing 300. Seven of the secondary schools have been completed and each of them cost N4.5 billion and it is free for Rivers children.

“Each of the schools needs N800 million a year for operations; right now, only one is operational. Government is willing to admit the rescued girls free of charge to the school. Government is building one book centre and seven libraries in Port Harcourt. The local libraries have been completed. We decided to focus on education and agriculture as a way of curbing criminality.”