Jonathan should contest in 2015 - Oba of Benin 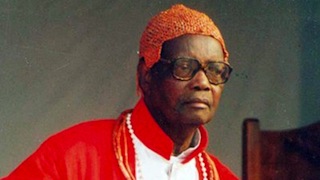 The Oba of Benin, Omo n’Oba n’Edo Uku Akpolokpolo Erediauwa, on Friday in Abuja enjoined President Goodluck Jonathan to contest for the 2015 Presidential Election to enable him continue his good work for the country.

Erediauwa, who made the call when he addressed State House correspondents in Abuja, after a closed-door meeting with President Goodluck Jonathan, said his kingdom had since embarked on special prayers for the success of the president in next year’s general elections.

The Oba, who was represented by his son, Prince Eheneden Erediauwa, said the kingdom had also embarked on special prayers for the continued survival of Nigeria as a geo-political entity.

“On behalf of my father, who sent me here to convey this message to Mr President, that he has been following the things that have been happening in the country.

“He considers Mr President his Son and he has asked me to present this special message to Mr President, to tell Mr President that he is praying for him in the Benin Kingdom.

“He is praying fervently for him to be able to withstand the pressure,” he said.

He noted that the president was doing a good job. “We pray that the opportunity will come for him to continue the good work he is doing in Benin and other parts of South South for at least another term.

“I believe that is the commitment we have in this kind of special prayer coming from the Oba of Benin, my father.

Erediauwa expressed support of people of his kingdom to the Federal Government.

He said the kingdom would continue to pray for the president to enable his administration overcome all security challenges facing the country.