No LASG Project In LASPOTECH 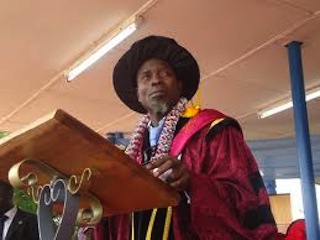 The Lagos State Government has been accused of not contributing to the development of one of its state-owned institutions, Lagos State Polytechnic, LASPOTECH, for over 16 years.

This accusation was made by a senior lecturer who was also a former principal officer of the institution in an exclusive interview with our P.M.NEWS CampusSquare.

The senior lecturer, who pleaded anonymity, stated that, these issues did not just start with this present administration. “For the eight years that Asiwaju Bola Tinubu spent as the state governor, nothing was released for any capital project. Only monies meant for accreditation exercises and salaries were released.

“All major projects in those years were done either through the Education Trust Fund, ETF or developmental fees and acceptance fees paid by the students of the institution. Tinubu never attended any of the convocation ceremonies conducted in the institution during his tenure,” he claimed.

The senior lecturer also claimed that Governor Babtunde Fashola is really no different. “Apart from the meagre funds released for accreditation exercise and salaries, he only approved the construction of the building for the institution’s School of Technology and the completion of its third gate road.

LASPOTECH relies on the Tertiary Education Fund, TETFUND, and students’ developmental fees for school projects. The sports complex has been abandoned for years. Governor Fashola only visited the school late last year to inspect the School of Technology building which is near completion.”

When asked if the school management ever approached the state government for funds for capital projects, he stated that: “In the days of Tinubu, when we were about to be booted out of the Ikosi Campus, we requested for money to move our furniture fittings and equipment to the Ikorodu campus. But instead of granting our request, we received lorries of mobile police men. You cannot query them,” he quizzed.

“The management makes requests, writes and follows up. For example, LASPOTECH cannot fix a date for convocation without consulting the governor’s protocol to confirm his availability, yet he has never turned up for the occasion. Any government that wants to advance its people technologically should start from human capacity development.”

Asked if the inadequate funding is responsible for the high school fees being paid by the Part-Time students of the school, the lecturer said that, “there is no way we can sustain the polytechnic without the part time programmes. As at today, they are the ones sustaining this school for all I care.”

But the institution’s Deputy Registrar and Public Relation And Information officer, Lanre Kuye, has, however, countered the claims, labelling them as baseless.

Kuye said: “It’s a big lie if anybody tells you the state government has not done anything for LASPOTECH. The state government constructed the new road linking Itokin outward third gate and a new laboratory was built for the school.

“As for the sports complex, the contractor was the one responsible for the abandonment of the project. Because of this, the state governor sacked the contractor and re-awarded the project to another one, who is doing a wonderful job now. I can assure you that the project will soon be completed.

“On the issue of the state governor not attending any of the school’s convocation ceremony, that is true. The governor is a busy man who can’t be everywhere at the same time. Somebody has to be there for him when he is not there that he did when he couldn’t make it to the ceremony.

“It’s true we enjoy the support of TETFUND but that doesn’t mean the school is not getting support from the state government.

“We have been able to construct a 700-seater auditorium in the School of Agriculture, a one-storey block of classrooms in the School of Engineering, Banking and Finance Department block in the School of Management and Business Studies, procured books and sundry items/equipment for various departments in the polytechnic, among others with the TETFUND.

“We have not only consolidated on the polytechnic’s legacy of development, we have indeed expanded our scope of operations, re-engineered our structures and intensified physical development on the campuses of the polytechnic but we need more government funding to achieve more,” he said.