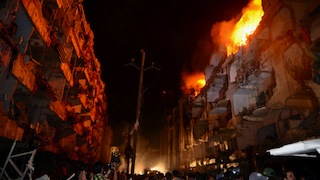 A blast killed three boys aged between 10 and 12 at a religious seminary in the southern Pakistani city of Karachi on Monday, police said.

The attack occurred in the impoverished western district of Orangi, which has a militant presence and a history of sectarian violence.

He said the police were trying to ascertain whether it was a planted bomb or a hand grenade that had been thrown.

A senior doctor at the Abbasi Shaheed hospital, Parshotum Rathore, confirmed the number of deaths and said those who died in the attack were between 10 and 12-years-old.

He put the number of injured at more than 12 and said the condition of four of those hurt was critical.

Nobody has so far claimed responsibility for the attack but Karachi, a city of 18 million people which contributes 42 percent of Pakistan’s GDP, has been plagued for years by sectarian, ethnic and political violence.