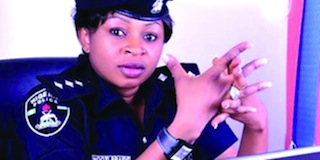 The police in Lagos state arrested seven suspected armed robbers between 24 and 30 April.

The command’s Public Relations Officer, Ngozi Braide, made this known in an interview with NAN in Lagos on Thursday.

She said three of the suspects were apprehended at Oko-Oba Area on April 26 after a tip-off and a gun duel with the gang.

The police recovered two locally made pistols, two live cartridges and a Bajaj Motorcycle snatched from the owner by the suspects were recovered.

She said that two other suspected robbers were arrested by Victoria Island Police Division at about 11:35 p.m. during a stop and search operation.

“The police were at Cowry ‘pin down point’ when they intercepted a Volkswagen commercial bus with registration number APP 291 XG with five occupants.

“The occupants of the bus jumped down and took to their hills and the policemen gave them a hot chase. Two of them were arrested while others escaped.

“Items recovered from the vehicle were one chief revolver pistol and one cut-to-size locally made pistol with two live cartridges,” she said.

Braide said that the remaining two suspects were arrested on 28 April by policemen attached to Ketu Division, who acted on a tip-off.

The spokesperson said that the suspects belonged to a syndicate who allegedly specialised in stealing vehicles at car parks.

She said that the suspects were nabbed with one Honda salon car with registration number KJA 612 AE allegedly removed from a church, in Ojudu, Lagos.

Braide said that all the suspects had been transferred to the State Criminal Investigation Department, Panti, Yaba, for further investigation.

In another development, the driver of a truck carrying petroleum products was arrested for allegedly killing of one Ms Bamidele Kikelomo, a road cleaner with Lagos State Waste Management Authority.

She said that the driver allegedly lost control of the vehicle and ran over the victim, who was sweeping the Ikorodu Expressway at Ojota on April 29.

The spokesperson said the incident occurred at about 2 p.m.

“The victim was rushed to Lagos State Accident and Emergency Unit where she later died.

“The corpse has been deposited at Mainland Hospital mortuary for autopsy and the incident is under investigation,” she said.