Workers celebrate May Day in Abuja amidst tight security 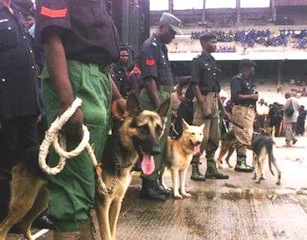 Workers in Abuja on Thursday celebrated May Day amidst tight security as the Eagle Square, venue of the celebration, was cordoned by security agencies.

All roads leading to the square were closed, forcing workers to trek about 200 metres to the venue.

The workers were also thoroughly searched by security personnel before being allowed in.

All vehicles that were parked about 200 metres to the square were towed by police and Federal Road Safety Commission personnel.

Armed personnel from the military, police and Nigerian Security and Civil Defence Corps, supported by sniffer dogs, took position in and around the venue.

Their effort was complemented by a police helicopter on patrol.

NAN also reports that ambulances, tow vans and fire engines were deployed in and around the square for any eventuality.

It was also observed that communication went off as subscribers to the various GSM networks could not make or receive calls shortly after President Goodluck Jonathan arrived at the Eagle Square.

The Inspector-General of Police, Mohammed Abubakar, on Wednesday ordered commissioners of police in the 36 states and the FCT, to provide adequate security, to enable workers to celebrate the day without hitch.