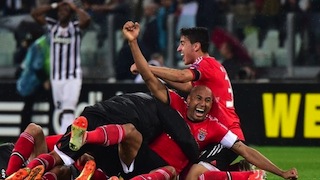 Benfica and Sevilla reached the Europa League final Thursday, further cementing an Iberian grip on the sport on the continent.

Benfica, runners-up to Chelsea in last year’s final, weathered a Juventus onslaught in Turin to hold out for a 0-0 draw and a 2-1 semi-final aggregate win.

They ensured the stalemate despite having Enzo Perez sent off for a second bookable offence with 23 minutes to play.

The Portuguese side restricted the Italians to only a handful of serious opportunities as Juventus failed to score at home for the first time in 25 matches this season.

The loss also denied Juventus, who are heading for the Serie A title this season, the opportunity to play the May 14 final on their home ground.

Juventus coach Antonio Conte insisted his side had been the more positive.

“They had two shots on goal over the two legs and now they’re into the final. In the end, the least deserving team have gone to the final,” he said.

“We gave it everything we could but it wasn’t enough. Now we have to turn our attention to winning the title, which we can do on Monday against Atalanta.”

Benfica coach Jorge Jesus said: “We came under a lot of pressure against a strong side featuring the likes of Carlos Tevez, Fernando Llorente and Arturo Vidal.

“But tonight we showed how we can defend.”

Cameroon international Stephane Mbia headed home in the fifth minute of stoppage time to take Sevilla into the final on away goals despite losing 3-1 on the night away to Valencia.

An early strike from Sofiane Feghouli and Beto’s own goal had wiped out Sevilla’s 2-0 first leg advantage inside 25 minutes.

Jeremy Mathieu’s goal midway through the second-half then seemed to have Valencia on route to the final, but Mbia, on-loan from Queens Park Rangers, powered home Federico Fazio’s flick-on from a long throw to deny Los Che with the last attack of the game.

“I think it is the happiest moment of my life,” said Mbia, who also scored in the first leg. “It is unbelievable. I don’t have the words to describe it.”

Inspired by overcoming a 3-0 first leg defeat to beat Basel 5-0 at home in the return in the quarter-finals, Valencia went ahead on 14 minutes when Feghouli cut inside onto his left foot and his shot deflected off Fazio and flew into the roof of the net.

The Algerian international came close again when he was denied by a fine low save by Beto.

However, the Portuguese goalkeeper was unfortunate moments later when the ball rebounded in off his back after he had made a fine save to turn Jonas Goncalves’ header onto the bar.

The hosts looked to have sealed their place in the final 21 minutes from time when Mathieu thrashed home after the ball fell perfectly for the French defender from Fede’s corner.

However, Mbia’s dramatic intervention means it will instead be two-time winners Sevilla who will face Benfica in the final in Turin on May 14.