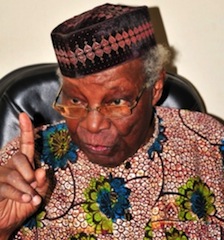 A statement released by the family on Sunday 4 May announced his death at the age of 96.

He was reported to have died after recovering from a brief illness.

A family source as well as a prominent Nigerian lawyer said news of Justice Oputa’s death to SaharaReporters. The family source confirmed that the jurist died today at 3.30 p.m. at his Abuja home, shortly after he was discharged from hospital.

Justice Oputa had struggled with failing health for several months, culminating to a stroke in February 2014.

He was educated at Oguta and Christ the King College, Onitsha before proceeding to Yaba Higher College. He transferred to Achimota College in Ghana, earning a BSc in economics in 1945.

On his return to Nigeria, he taught at a secondary school and also served as an assistant district officer. After earning BA in history at home, he relocated to London where he studied law and was called to the Bar at Gray’s Inn.

In his last few years, Justice Oputa divided his time between Abuja and his country home in Oguta.

He is survived by a wife, Mrs. C. Oputa, and several children and grandchildren, among them his son, Charly Boy.

Our family source stated that the family was yet to decide on funeral arrangements.