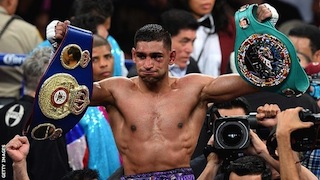 British star Amir Khan won a unanimous decision over former champion Luis Collazo in his first fight after moving up to the welterweight division on Saturday.

The 27-year old, who was fighting for the first time after a 12-month layoff, knocked Collazo down three times in the non-title fight at the MGM Grand Hotel, Las Vegas, USA.

Khan knocked Collazo down for the first time in the fourth round and then twice in the 10th round.

Khan, a former light welterweight world champion, weighed 161 pounds when he stepped into the ring on Saturday, 14 pounds over his weight at Friday’s weigh-in.

The bout was on the undercard of the Floyd Mayweather-Marcos Maidana welterweight unification title fight.