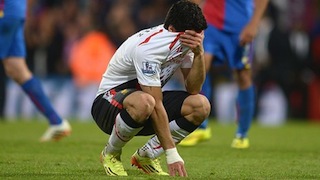 Liverpool’s Premier League title bid was left in ruins after Crystal Palace mounted a sensational comeback from 3-0 down to draw 3-3 at Selhurst Park on Monday.

Liverpool were on course to move three points clear of Manchester City at the top of the table after quick-fire goals from Daniel Sturridge and Luis Suarez early in the second half stretched a lead procured by Joe Allen’s 18th-minute header.

However, Damien Delaney pulled a goal back for Palace in the 79th minute before substitute Dwight Gayle scored twice in seven minutes to rip the heart out of Liverpool’s title challenge.

It was a comeback reminiscent of Liverpool’s famous fightback against AC Milan in the 2005 Champions League final in Istanbul, and left Suarez — as well as several visiting fans — in tears at the final whistle.

“You cannot come here against a very good side, be the threat that we were, and then defend as we did. It is criminal, really,” Liverpool manager Brendan Rodgers told the BBC.

Liverpool lead the league again, by a point, but City now effectively need only four points from their last two games to claim the title.

They host Aston Villa on Wednesday before welcoming West Ham United to the Etihad Stadium on the season’s final day and with a nine-goal goal difference advantage over Liverpool, the title is theirs to lose.

Rodgers added: “There is no doubt. Manchester City will go on and win it. We needed to win to keep the pressure on going into the last game and we did not do that.

“You have to have that maturity to see it through and we did not do that. It was bitterly disappointing, and I would expect Manchester City to go on and win their two home games.”

Palace manager Tony Pulis said: “When we scored the first goal, I thought we’d have a sniff. And then with the support, everything took off. After the second goal went in, it was just a matter of time.”

Philippe Coutinho dropped out of the Liverpool starting XI due to a knock, but the visitors were boosted by the return of Sturridge, making his first start since April 13 after a hamstring injury, and they began brightly.

Yannick Bolasie was fortunate not to concede a penalty after sliding in on Glen Johnson and after Julian Speroni had blocked from Suarez in the immediate aftermath, Mamadou Sakho headed wide from Steven Gerrard’s subsequent corner.

Johnson squandered an opportunity to put Liverpool ahead when he ghosted onto a floated pass from Allen and headed over, but after Sturridge had seen a shot deflected wide, the visitors went ahead.

Palace had not conceded a goal from a set-piece this season prior to the game, but that recorded was ended in the 18th minute when Allen got away from Wales team-mate Joe Ledley to head in from another Gerrard corner.

Palace’s first-half opportunities had emphasised the slenderness of Liverpool’s lead, but the visitors quickly set about stretching their advantage in the early stages of the second period.

After Sturridge had seen a curling effort clawed onto the post by Speroni, with Suarez blazing the rebound wide, the England striker doubled his side’s lead in the 53rd minute with a low deflected shot.

Within the blink of an eye it was 3-0, as newly elected Football Writers’ Association Player of the Year Suarez exchanged passes with Raheem Sterling before unerringly slotting the ball between Speroni’s legs.

It was his 31st goal of the campaign, equalling the record tally for a 38-game Premier League season jointly held by Alan Shearer and Cristiano Ronaldo.

Sturridge and Suarez both shot over, while Speroni had to punch a fierce drive by Johnson over the bar, but Palace’s extraordinary late salvo left Liverpool reeling.

Delaney sounded the rallying cry with a deflected shot from the edge of the box, before Bolasie powered down the left and teed up Gayle to make it 3-2 two minutes later.

With Liverpool on the ropes and Selhurst Park shaking, Gayle poked home an equaliser in the 88th minute to leave Rodgers’s men on their knees and send the title towards the Etihad.