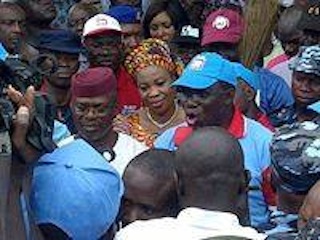 Oni dumped the Peoples Democratic Party (PDP) for APC today at Ifaki-Ekiti. He was removed as governor of Ekiti state by the Court of Appeal in 2011.

Oni, who announced the defection on Monday at Ifaki-Ekiti, said he dumped the PDP to help current the Governor, Kayode Fayemi to win a second term.

According to him, Fayemi is the best option for the state in the June 21 governorship election.

“Today, we are erecting a new platform to build the future of Ekiti, the future is paramount in our hearts and what our children will say about us.

“Though, we might have had a past that was rough together, we must think of who can take the right decisions for us to build a prosperous future for Ekiti.

According to NAN, Ekiti governor, Fayemi who was present at the occasion, described Oni’s defection as “ a home coming”.

He assured the former governor that he would be accorded all the rights and privileges in his new party.