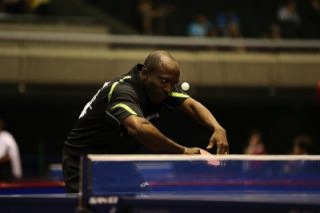 Nigeria’s quest for promotion to the championship suffered a setback at the 2014 World Team Table Tennis Tournament when the Segun Toriola captained team lost narrowly to England in the quarter-final stage to settle for the seventh place in Division Two.

The outstanding performance of the team in Tokyo, Japan, put the team in good frame for the 2014 Commonwealth Games holding in Glasgow, Scotland in July this year.

England were favorites, having always defeated Nigeria in previous matches of this magnitude but this time Nigeria gave them a contest to remember.

Nigeria’s of Toriola, Aruna Quadri, Ojo Onaolapo and Kazeem Makanjuola showed some real promise against England pushing their opponents all the way.

Drinkhall won the Spanish Open few weeks ago in the city of Almeria in Spain but against Quadri in Japan he was beaten black and blue.

The win against Onaolapo brought out the best in the British players who went on to win their next two matches against Quadri and Toriola.

After the match, England captain, Drinkhall praised Team Nigeria and also admitted that the encounter against Nigeria was the most difficult for them in the tournament.

“We’re really happy to have come through, we had a difficult start to the match with me losing the first game. I think if I had won that, we might have won 3-0; this was the first real test for our team and I am happy we made it through. We will take the positives from this match,” he admitted.

Meanwhile, table tennis buffs lauded the Nigerians for giving a good account of themselves against England as well as their overall performance in the competition.

“I never expect much from the Nigerians but since the start of the tournament, they proved to be a good team especially with what they played against England. I think they are a good side and they just need to continue with this fine form to get back to the elite division. I wish them well,” Japan’s Ishikawa Juan said.

The Nigerian female team also gave a good account of themselves in the classification match to avoid relegation. They beat Peru, Turkey and Israel. The wins ensured that they remain in Division Two for the next edition of the competition which will hold in Kuala Lumpur, Malaysia in 2016.

The performance of Nigeria is expected to improve their world rating when the International Table Tennis Federation (ITTF) releases the next world ranking after the championship.