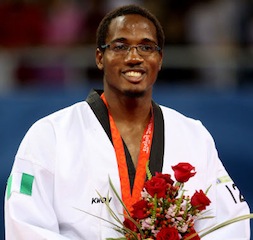 Beijing Olympics bronze medalist, Chika Chukwumerije is leading Nigeria’s quest for honours at the 2014 African Senior Taekwondo Championships, which kicks off on Wednesday May 7 in Tunis, Tunisia.

The five-man team departed the country at the weekend with the aim of amassing points from the competition, which is a G-4 ranked tournament with the gold medalist getting 40 points.

The tournament will also play a crucial role in determining the country’s qualification for the 2016 Rio Olympics in Brazil.

Uche will compete in the mens -87kg category, in which he recently won gold at the Belgian Open and he is the current All Africa Games Champion. His world rating is 35.

Muhammad, who is rated 46 in the world and also a gold medalist at the 2011 All Africa Games will compete against the continent’s best in the -58kg.

Abuja-based Onofe, a bronze medalist at the 2011 All Africa Games has missed out from the world rating following his inability to compete in an international competition and he is expected to jostle for honour in the men’s -80kg category.

The only female in the team, Joy Ekhator is a double All Africa Games medalist and she is ranked 67 in the world. She will compete in the women’s -49kg.

Chika, who captained Nigeria to the 2012 London Olympics will compete alongside, Olympics champion, Gabon’s Anthony Obame as well as former world champion, Mali’s Modibo Keita in the men’s +87kg.

According to Secretary of the Nigeria Taekwondo Federation (NTF), Sunny Obot, the points accumulated during G-4 competition would qualify the athletes for other international competitions.

“The athletes we are featuring are champions in their weight categories. We hope that they do very well. This competition will help because it is a G-4 tourney. What I mean by G-4 is that you need to accumulate points, you can only reach the semi-finals of this competition, when you make 40 points.

For example, Chika Chukwumerije is ranked 18th in the world. If Chika gets to semifinals or wins a gold medal in this competition, automatically that takes him to about 5th or 6th in the world in his weight category. This competition is very important for our athletes. And the athletes know that if they want to participate at the Rio Olympics in 2016, they must take this competition seriously.”

He however, expressed confidence in the performance of the athletes that would represent Nigeria at the competition, saying that: “They are all champions in their own rights.”

The trip was sponsored through private funding.