Jonathan, Kenyatta vow not to surrender to terrorists 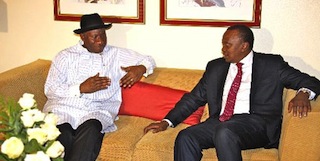 President Goodluck Jonathan and his Kenyan counterpart, Uhuru Kenyata on Monday vowed that their country would not succumb to terrorism despite the current spate of terrorist attacks on their country.

The two Presidents spoke at a joint press conference they addressed in Abuja after a bilateral talk they had as part of activities of the Kenyan leader’s state visit.

While commending the Kenyan President for refusing to cancel his three-day state visit to Nigeria despite a terrorist attack in the country’s capital, Nairobi, on Sunday President Jonathan described terror attacks as diversionary, arguing that terrorists attacked nations they perceived to be showing signs of progress.

Jonathan also commiserated with the government and people of Kenya on the Sunday incident.

The Nigerian President who said the aim terrorists was to set Nigeria back by intimidating the people and government of the country, he would not allow them to succeed in stopping business in Nigeria.

“ For us in Nigeria, we have been experiencing these dastardly acts for sometimes now.

“Kenya is beginning to experience it. We have to appreciate the courage expressed by the president for not aborting the state visit and the invitation to the World Economic Forum because of the attack. ‎

“Its a clear signal from here that the attack will not stop us from moving forward.

“The act of terror in Africa is diversionary being organised by a group of people that does not want the continent to move forward.

“Whenever a country is showing any sign of progress, these criminal elements will strike.

“Yes, they are setting us backward, they are slowing us down, they are killing innocent citizens, they are destroying properties but surely we will overcome and terror will not stop Africa from progressing.

“The terror attack is naturally to frighten people ‎but as governments, we will do our best to make sure that we provide maximum protection for our citizens.”

The Kenyan President also condoled President Jonathan and all Nigerians over recent terrorist attacks on the country.

The Kenyan President added that though his. Country lost a number of its nationals in the Sunday incident in Nairobi with many others injured, he did not cancel his trip to Nigeria to show the terrorists that they can disrupt his government.