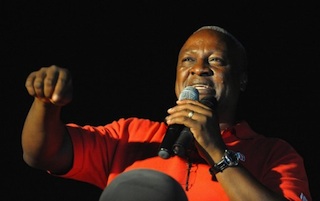 President John Dramani Mahama has called on member states of the Economic Community of West African States (ECOWAS) to help end the Boko Haram campaign of terror in Nigeria.

In a correspondence to President Goodluck E. Jonathan, which has been confirmed by sources at the ECOWAS Secretariat and at the Flagstaff House, President Mahama described those atrocities and heinous crimes being perpetrated against the good people of Nigeria as absolutely unacceptable.

President Mahama, who wrote the letter in his capacity as ECOWAS chairman, said he had been deeply saddened by the recent bomb attacks in Nyanya, Abuja, resulting in the death of innocent citizens and the kidnap of girls who were in school to take part in an examination in Chibok, Borno State, by elements of the terrorist group, Boko Haram.

Sources have confirmed that President Mahama was expected in Nigeria this week to meet President Jonathan to hold discussions on the security situation in Nigeria and the Boko Haram issue.

President Mahama, in his correspondence, expressed hope that the girls who were kidnapped would be returned to their families in the shortest time.