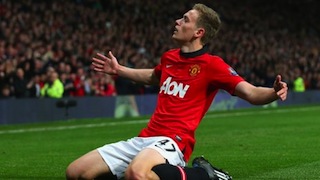 Teenage debutant James Wilson scored twice as Manchester United rang out the old and ushered in the new in a 3-1 win at home to Hull City on Tuesday.

While the 18-year-old Wilson introduced himself to Old Trafford, captain Nemanja Vidic made his last home appearance, and there was also a late cameo from United great Ryan Giggs that may have been a farewell.

Vidic will join Inter Milan on a free transfer after United’s last game at Southampton on Sunday, while 40-year-old Giggs, currently the interim manager, will shortly be out of contract.

For the last home game of his interim role, ahead of the anticipated appointment of Louis van Gaal, Giggs gave a nod to the club’s traditions by picking both Wilson and 20-year-old Tom Lawrence.

Wilson scored once in each half, with substitute Robin van Persie adding a late third after Matty Fryatt had replied for FA Cup finalists Hull as United signed off with a positive home result following a wretched season.

Giggs chose to name himself and Vidic among the United substitutes, but the biggest surprise on the team-sheet was the presence of debutants Wilson and Lawrence in the hosts’ starting XI.

Vidic made his entrance earlier than anticipated in the 22nd minute, but it came after Phil Jones was forced off with a shoulder injury that will be of concern to England coach Roy Hodgson.

The versatile defender was taken to hospital after leaving the field following an aerial collision with Maynor Figueroa, but Wilson’s 31st-minute opener helped to lift the mood around Old Trafford.

Adnan Januzaj’s right-wing free-kick was headed down at the back post by Marouane Fellaini and the teenager displayed the instincts of a striker several years his senior by dispatching a crisp left-foot half-volley.

Hull failed to muster a single shot in the first half and manager Steve Bruce, the former United captain, reacted by introducing Fryatt and Yannick Sagbo at the interval, but the hosts remained on top.

Januzaj, United’s one consistent source of invention, was the architect, streaking down the right flank and teeing up Fellaini.

The Belgian’s poked shot was blocked by Jakupovic but Wilson was on hand to tuck the rebound away.

There was to be no hat-trick for the man of the hour, however, as Giggs elected to introduce Van Persie in his place shortly after Fryatt had reduced the arrears with a dipping shot from 25 yards.

Giggs was the next man to enter the fray, earning a standing ovation as he came on in place of Lawrence to make his 963rd appearance for the club.

There were cries from the crowd of “Shoot!” whenever he touched the ball, but although he could not crown the occasion with a goal, he did contribute an assist of sorts.

A typically incisive pass in the 86th minute found Van Persie, who lashed home at the second attempt after his first effort came back off a defender.

An injury-time free-kick presented an opportunity for a perfect ending, but although Giggs got the ball up and over the wall, Jakupovic foiled him with a flying save.