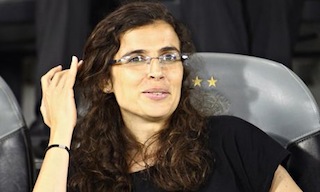 Helena Costa, pictured in 2013 during her spell as head coach of Iran's women's national team

French second division club Clermont on Wednesday appointed Portuguese Helena Costa as coach, becoming one of the highest-level teams in Europe to put a woman in charge.

Costa, 36, trained with Benfica before coaching the women’s national sides in Qatar and Iran. She has also worked as a scout for Scottish champions Celtic and top clubs in Spain and Portugal.

“This nomination will allow Clermont Foot 63 to enter a new era,” said a club statement announcing the appointment.

Costa’s portuguese football training methods have been lauded in many quarters. At her early twenties, before she graduated in Sports Science, she achieved the best final classification in 120 candidates.

She continued her studies and in 2004 had the best classification possible in Game Analysis Master degree. Also with the same performance she completed the UEFA Basic License and UEFA Advanced License at the Portuguese Football Federation.

In 1998 she began her career at Sport Lisboa e Benfica Youth Football Boys teams as assistant coach and from 1999 until 2004 she was the U-9 and U-10 head coach.

In 2004/2005 season Costa achieved the 2nd Place on National League as assistant coach of U-17 Boys Team at Benfica. Never leting the Youth of Benfica behind, in 2005 accepted her first challenge with a senior male team, the Sociedade Recreativa e Desportiva Cheleirense, where she won the 1st Place on Regional Lisbon League – Serie B.

The following year she jumped to the women’s football where Helena could won several titles as head coach at Sociedade União 1º de Dezembro and Odivelas Futebol Clube.

Before accepting national team jobs with Qatar and Iran.

Costa is the second woman to be manager of a high profile men’s team. Carolina Morace coached , Viterbese of Italian Serie C1, a post she took in June 1999.

She eventually resigned from her position after only two matches, because of heavy media pressures.