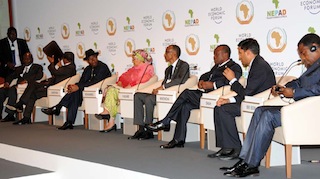 President Goodluck Jonathan on Wednesday urged African leaders to go beyond campaign ‎slogans if they want to reap benefits of investment in agriculture. ‎

The President made the call during the closing of a high-level plenary of Grow Africa‎ themed: “A Leadership Agenda for Investing in African Agriculture.”

The event, held at the Sheraton Hotels, Abuja, was on the sideline of the World Economic Forum for Africa, to be declared open on Thursday.

Presidents Jakaya Kikwete of Tanzania, Paul Kigame of Rwanda, Boni Yayi of Benin Republic and Prime Minister of Cote d Ivore, Daniel Duncan‎ and Jonathan were the panelists at the event.

President Jonathan stressed the importance of encouraging the private sector to invest in agriculture.

“You have to create environment to encourage investment because businessmen do not run charity organisations. That is why ‎we are now looking at agriculture as a business.

“The youths before now see agriculture as something that is left for the poor and old people in the village with traditional instruments. However, if you invest in agriculture, you will make returns on your investment.

“Agriculture is key because people must eat food no matter the situation.”

He stated that there was a unique opportunity in agriculture, “because you create jobs, achieve food nutrition and empower women.”

“Financial inclusion is one of the limitations discouraging young people from investing in agriculture but if we encourage them, they will be attracted to the sector,” he said.

NAN reports that the President used the occasion to commend world leaders and the close to one thousand participants for defying terror threats to attend the World Economic Forum for Africa‎.

He also commended the participants for not giving in to the threat of terror and for accepting to attend the Forum and lauded the WEF team for not canceling the event.

Presidents Kikwete, Kigame, Yayi and Duncan agreed with President Jonathan on the importance of involving the private sector in developing the agriculture sector.

Kigame stressed that the importance of agriculture could not be overstated. “We are only focusing on it to maximise it’s benefits for us and our people.”