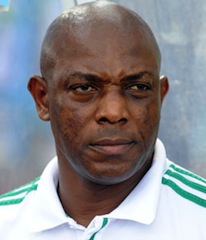 The Super Eagles of Nigeria has moved up a place in the monthly FIFA/Coca Cola World Ranking released early today by the world football governing body, FIFA.

There were no changes in the top ten on the African continents as Cote d’Ivoire maintained their first position with 830 points; followed by Egypt with 798 points; with 795 points Algeria remained static in third position.

Unmoved in fourth position is Ghana with 713 points; Cape Verde occupies the fifth position with 665 points; in seventh is Tunisia with 597 points; Cameroon are eight with 583 points; occupying the ninth position is Guinea with 580 points; while the tenth placed team is Mali with 545 points.

No fewer than 143 teams retained their April ranking. There were  some notable movement in the top ten, however, with Brazil climbing two places to fourth to lead the pack of four South American teams ahead of Colombia fifth, down one place, Uruguay sixth down one place and Argentina  seventh, down one place. It is Brazil’s best position on the global ladder since July 2011.

The other two Nigeria World Cup foes Bosnia-Herzegovina remained static in their 25th position, while Iran remained 37th. Meanwhile Honduras 30th, up two places are celebrating a return to the top 30 after an absence of 12 years.

The biggest climb, however, has been achieved by Mauritania from North-west Africa 139th, up 13 places, thanks to two wins in CAF Africa Cup of Nations qualifying.