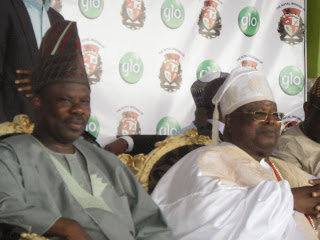 Governor Amosun and the Awujale

Amosun gave the hint today at the prayer session to mark the 80th birthday of the Awujale and Paramount Ruler of Ijebuland, Oba Sikiru Kayode Adetona at the Central Mosque, Ijebu-Ode.

He disclosed that the controversy surrounding the government’s action in February 2012 has been resolved.

“TASUED has come to stay. The school is back to life and will continue to exist. Very soon than you expect, the Governing Council of Tai Solarin University of Education will be constituted to enhance its smooth running,” he said.

The government had in 2011 announced that the institution would be affiliated to the Faculty of Education of the Olabisi Onabanjo University, Ago Iwoye, a decision which was greeted with vehement opposition.

The governor thanked the Awujale for his fatherly intervention on matters relating to the existence of the institution, which is the first university of education in Nigeria.

The states helmsman at the prayer session, which had Oba Rilwan Akiolu of Lagos, the former Governor of Lagos, Asiwaju Bola Ahmed Tinubu, Senator Adegbenga Kaka and a representative of the Sultan of Sokoto among other prominent dignitaries in attendance, described the Awujale as a lover of the Ijebus’, “who will do anything without looking back for the sake of his people.

The governor also prayed God to grant him many more years of impacting on the nation.

In his remarks, Oba Adetona lauded Amosun for his unprecedented infrastructural development of the Gateway State and thanked him for yielding to the request of the Ijebu people on TASUED.

In his lecture, the Grand Chief Imam of Ijebuland, Sheikh Abdul Rasak Ishola Salaudeen urged Nigerians to follow God’s pattern for living. “We shall all give account of our deeds before the Almighty”.

The grand finale of the monarch 80th birthday which began on Sunday will come up tomorrow with a big party to be held at the Otunba Dipo Dina International Stadium, Ijebu Ode.

Among the dignitaries expected at the event is the President Goodluck Ebele Jonathan.