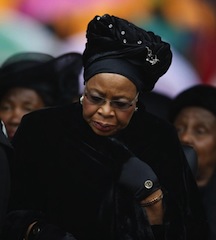 Nelson Mandela’s widow Graca Machel has broken the customary mourning period to call on the Nigerian government and international community to do more to find the 200-plus schoolgirls kidnapped by Boko Haram.

“The Nigerian government has a responsibility to protect its citizens, and keep them safe,” she said, amid allegations that the authorities ignored a warning of the April 14 attack by the Islamist group.

“If the world can mobilise all the means possible to search for a plane carrying 239 passengers, certainly it can also mobilise the means to find our girls. They deserve nothing less.”

Machel, a noted activist in her own right, said she felt compelled to break the traditional Xhosa mourning period, which for her was reduced from one year to six months.

Mandela died in December at his home in Johannesburg, aged 95.

“I decided to break the restrictions of my mourning because silence is not an option. I know however, that Madiba will understand and approve,” she said.

In an open letter, Machel said the girls’ “plight has touched millions of hearts in Africa and beyond.”

Addressing the parents of the girls, she said “I am a parent and so I stand amongst you holding your hands, in pain and anguish; in solidarity.”

Machel barely left her husband’s bedside in the final six months of his life.

Since his death, the Mozambican human rights campaigner has rarely been seen in public.

Machel was Mandela’s third wife, and he was her second presidential husband.

She was the widow of Mozambican president Samora Machel who died in a plane crash in 1986.

She was 27 years younger than Mandela when they married on his 80th birthday in 1998.