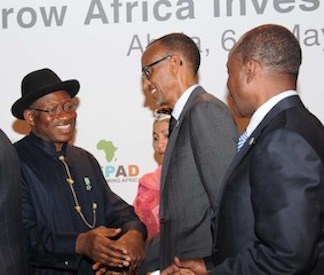 President Goodluck Jonathan of Nigeria; President Paul Kagame of Rwanda and Erastus Mwencha of World Health Organisation at the High Level closing plenary of Growafrica Investment Forum in Abuja on WEDNESDAY 7 May 2014

President Goodluck Jonathan said Africa is open for direct foreign investments and will cease from demanding aids from the developed world.

He spoke during a session on ‘Partnering for Prosperity’ at the World Economic Forum (WEF) on Africa, holding in Abuja.

He said that the continent had been more stable in the past decade, having shifted considerably from the days of military coups and constant demand for relief aids.

The president said that the economies of some African countries had been growing in double digit figures while that of Nigeria, though at 6.8 per cent, was the largest on the continent.

“African market is huge and less competitive for big foreign investors; that is why the demand now from African leaders is less aid and more investments,” he said.

President Jonathan argued that the excuse of inadequate infrastructure was becoming untenable.

He said this was sequel to the gradual but massive improvements being made by Nigeria and other African countries in rail, roads and other facilities, to promote business and industry.

Jonathan explained that some restriction on some importation and other areas were only meant to protect local industry and not to build barriers or send investors away.

“We are open. We are not building walls; there is no way you erect barriers and think things will work well.

“That is why we are having negotiations. There is political will in Africa now for us to integrate.

“Let me urge you businessmen and women that Africa is a green field and you will not regret investing here,” he said.

He underscored the need for the manufacturing sector to be encouraged, noting that a Nigerian, Aliko Dangote, is the richest African because of favourable government policies.

He also pointed out that unnecessary bureaucracy must be stopped.

He said it was good that the government policies made Aliko Dangote the richest African.

“We need more Alikos because they will invest in Africa. We need growth that will be inclusive, that is why we are here,” he said.