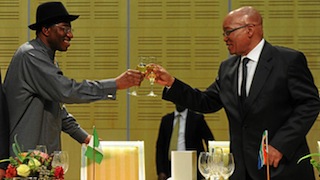 A statement by the Presidential Spokesperson, Dr Reuben Abati, stated in Abuja.

The president said that the victory was an affirmation of the enduring popularity of President Zuma and the party of Nelson Mandela, Oliver Tambo and other great heroes of the anti-apartheid movement.

Jonathan also said that the victory was a reaffirmation of the confidence of the majority of the people of South Africa in the ability of the ANC Government to progressively achieve more inclusive national economic development and prosperity.

Abati said that President Jonathan and Nigeria felicitated with the people of South Africa on the peaceful and successful conduct of the elections which were the first since the passing away of Dr. Nelson Mandela.

The president said he believed that the elections and the ANC’s fifth consecutive victory at national polls were a well-deserved tribute to the Madiba (Mandela).

He said that the Madiba’s contributions to the emergence of a non-racist and truly democratic South Africa remained legendary.

Abati said that the president looked forward to continue to work with President Zuma and his ANC Government.

This is with a view to further strengthen the cordial and mutually-beneficial relations between Nigeria and South Africa, especially in the area of bilateral trade and investments.

The president also noted that under the continued leadership of the ANC, Nigeria and South Africa would keep on working together with others for the attainment of greater peace, political stability, economic development and progress in all parts of the African continent.

He wished President Zuma and the ANC enduring accomplishments in the service of the people of South Africa.