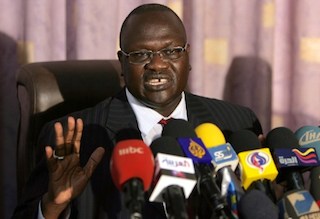 Reik Machar: leader of the rebellion

The two rivals, who first shook hands and then prayed together, “agreed that immediately all hostile activities will stop within 24 hours from the signing of this agreement,” Seyoum told reporters.

“Fighting will stop,” he added.

Kiir, explaining his olive branch to his bitter rival, told reporters that as leader he had in the past accepted compromises and had “been in a position to make peace with everybody.”

The deal, which follow intense lobbying from world leaders with Washington slapping sanctions on senior military commanders, came following UN warnings that crimes against humanity had likely be carried out in the still raging conflict.

“I’m happy that we have this evening signed the agreement,” Machar told reporters, dressed in a business suit he had swapped for military fatigues worn while fighting in the bush.

The deal recommits to an earlier ceasefire, in tatters ever since it was signed in January.

The rivals “agreed that a transition government offers the best chance to the people of South Sudan” with the promise of fresh elections, without giving a date, Seyoum said.

Both sides also “agreed to open humanitarian corridors… and to cooperate with the UN” to ensure aid is delivered to the more than five million people in need, he added.

But while both leaders promised peace, fierce fighting still rages, amid United Nations warnings of the risk of severe famine and genocide.

The war has claimed thousands — and possibly tens of thousands — of lives, with over 1.2 million people forced to flee their homes.

Aid agencies are warning that South Sudan is now on the brink of Africa’s worst famine since the 1980s.

Top African Union official Smail Chergui, the pan-African bloc’s peace and security commissioner, said that while the inking of the deal was welcomed, “even with the signing, given the current crisis, the restoration of peace in South Sudan will not be easy.”

A UN peacekeeping mission report released Thursday said that “fighting continues with little hope that civilians will see any respite from the relentless violence”.

Warning of “countless” gross human rights violations, the UN report said “there are reasonable grounds to believe that crimes against humanity” have been carried by both sides.

UN rights chief Navi Pillay said Friday the two leaders must “stop the killing, before the fire they have ignited makes the entire country go down in flames”.

Pillay, a former head of the UN genocide court for Rwanda, said she recognised in the UN report “many of the precursors of genocide”.

These included hate radio urging rape and “attacks on civilians in hospitals, churches and mosques, even attacks on people sheltering in UN compounds – all on the basis of the victims’ ethnicity”.

The conflict, which started as a personal rivalry between Kiir and Machar, has seen the army divide along ethnic lines, pitting members of Kiir’s Dinka tribe against Machar’s Nuer.

The United States this week unveiled its first sanctions in response to the “unthinkable violence”, targeting one military leader from each side.