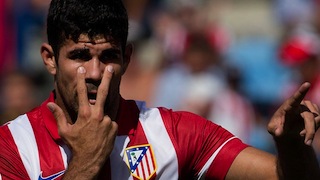 Atletico Madrid striker, Diego Costa has his eyes on the trophy

Atletico Madrid will travel to face Barcelona next weekend with La Liga title on the line after both sides were held to draws on Sunday.

Barcelona could only draw 0-0 at Elche but Atletico were held 1-1 at home by Malaga, and so Barca still trail Diego Simeone’s side by three points with a game to go.

The Catalans will be champions with a win next Sunday thanks to a better head-to-head record.

Real Madrid’s challenge is over, though, as they were beaten 2-0 away to Celta Vigo.

Atletico wasted the chance to seal their first title in 18 years at home as a win allied with Barca dropping points would have handed them the championship.

Atletico fell behind 25 minutes from time as Samuel headed into an empty net after lobbing Thibaut Courtois, but Toby Alderweireld’s header nine minutes later did at least salvage their unbeaten home record in the league this season.

Barcelona, meanwhile, were held by a side battling relegation for the second time in as many games as they couldn’t find a way past Manu Herrera in the Elche goal.

Real’s stumbling end to the campaign also continued as without the injured Cristiano Ronaldo they succumbed to two goals from Charles to leave them five points off the top in third.

Without the injured Diego Costa up front, Simeone paired Raul Garcia and David Villa in the Atletico attack and the two nearly combined for the opener on 12 minutes when Villa raced onto Garcia’s flick-on but saw his side-footed effort clip the crossbar on its way over.

Malaga then went on to more than hold their own for the majority of the first-half, but Atletico had two great chances to make the breakthrough just before half-time.

Firstly, Koke poked wide when unmarked inside the area from Juanfran’s low cross and moments later Garcia headed off target from another precise centre from Juanfran.

Malaga’s first clear chance came on the hour mark when Roque Santa Cruz latched onto Samuel’s pass but Courtois raced off his line to make a vital save low to his left.

The visitors did go in front five minutes later as this time Courtois was lobbed by Samuel as he left his area and the midfielder headed into an empty net.

Malaga could even have been further in front when Ignacio Camacho headed over from point-blank range and that miss was to prove crucial as Atletico rallied in the final quarter.

Willy Caballero made a fine one hand save to deny Villa once more, but from the resulting corner Alderweireld headed into the far corner.

Malaga had to see out the final few minutes with 10 men as Marcos Angeleri was shown a second yellow card for a foul on Diego Ribas and Jose Sosa sent the resulting free-kick inches wide.

Caballero had to make one more flying save from Adrian Lopez deep into stoppage time to ensure that the title race will go down to the final weekend.

Barcelona also suffered a frustrating day at the Martinez Valero in Alicante.

Andres Iniesta was captaining the side for the day on his 30th birthday and came within inches of opening the scoring when he thundered a volley off the bar early on.

Herrera then did well to turn behind a fierce drive from Lionel Messi and also saved Alexis Sanchez’s header from the resulting corner.

Messi came close again when his free-kick from the right flew across goal and just beyond the far post seven minutes before half-time.

The four-time World Player of the Year had Barca’s best chance three minutes into the second period as he cut inside onto his favoured left foot, but again Herrera stood up well to block the ball to safety.

Thereafter, Barca were restricted to shots from range, but nearly found a way through six minutes from time when Adriano curled the ball inches wide of the far post.

In Vigo, a severely depleted Real Madrid without Ronaldo and Gareth Bale were well beaten to end their slim title hopes.

Charles put the hosts in front just before half-time as he showed good strength to hold off Sergio Ramos before slotting past Diego Lopez.

And the Brazilian doubled his tally just after the hour mark as he pounced on a sloppy backpass from Xabi Alonso.