Hollande invites US, Britain to summit on Nigeria abductions 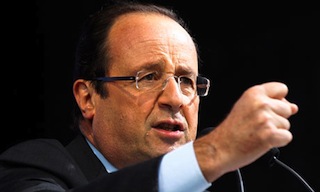 Hollande pledges help for Nigeria in hunt for kidnapped girls

French President Francois Hollande said Monday he had invited US and British officials to attend a Paris summit this weekend focusing on the threat from Islamist sect Boko Haram, which has abducted more than 200 schoolgirls in Nigeria.

“I asked the Americans and British to send a delegation to Paris on Saturday so we can act together and in an efficient way,” Hollande told journalists during a visit to the Armenian capital Yerevan.

Prior extending invitations to United States and Britain, Hollande had a conversation with Nigerian president. “I suggested, with Nigerian President Goodluck Jonathan, a meeting of Nigeria’s neighbouring countries,” he said during a visit to the Azerbaijan capital Baku.

“The meeting will take place Saturday “if the countries agree,” he added.

The leaders of at least five African countries – Nigeria, Chad, Cameroon, Niger and Benin may take part, a source close to the president said.

The kidnap of 276 schoolgirls on April 14 by Boko Haram in the northeastern Nigerian town of Chibok has sparked a wave of international outrage.

A team of French experts in “human and technical” intelligence arrived in Nigeria on Saturday to help in the search for the teenagers.