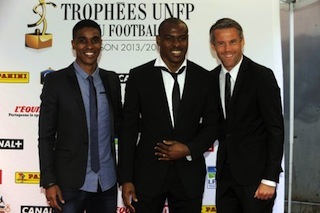 Super Eagles number one goalkeeper, Vincent Enyeama, has thanked Nigerians for their support which made it possible for him to be named the best African Player in the French Ligue I this season.

In a statement issued on behalf of Enyeama by Ben Alaiya, the Super Eagles Media Officer in Abuja wrote that: “he is delighted that he was picked as Africa’s best player in France and has been totally enthralled by the huge support of Nigerians over the award”.

Enyeama assured Nigerians that he would not fail the country during the 2014 World Cup in Brazil.

“Now the leagues are almost over across the world and all of us have a new focus, which is the World Cup, we will go there and enjoy ourselves and also excel for ourselves and the country.

“I can’t wait for the World Cup to start,” it quoted him as saying.

The Lille FC goalkeeper said he was optimistic of Nigeria’s chances of excelling at the World Cup. “God has always been the greatest supporter I have, He (God) has always been there for me when I needed support and He has continued to inspire me to greater heights.

“Apart from that, the support I get from my family and Nigerians have been massive inspiration to me. I pray that the World Cup will be a crowning glory for me, the team and all Nigerians,” it said.