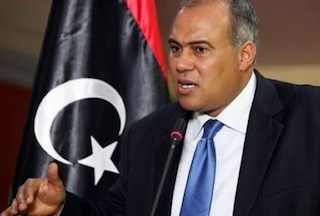 The Jordanian ambassador to Libya, Fawaz Aitan, who was kidnapped in Tripoli last month, has been freed, state television in the North African country said on Tuesday.

Aitan was already on his way back to his homeland following his release, the television station cited Jordan’s foreign minister, Nasser Judeh, as saying.

“The ambassador is doing well and he is now making his way back to his country,” Judeh was quoted as saying, without explaining circumstances of his release.

Masked gunmen had kidnapped Aitan in mid-April as he was going to work in Tripoli, shooting at his car and wounding his driver.

The incident was one of the latest targeting Libyan leaders and foreign diplomats in the increasingly lawless country, three years after NATO-backed rebels ended autocratic leader Moamer Kadhafi’s four-decade rule.

There has been no claim of responsibility for Aitan’s abduction.

But sources in Tripoli said the kidnappers had demanded the release of a Mohammed al-Dursi, alias Mohammed al-Noss, a Libyan jihadist who has been detained in Jordan for more than seven years over his alleged involvement in planning an attack on Amman’s airport.

The Libyan government has only said it established indirect contact with the abductors, without giving any more details.

An employee and a diplomat of the Tunisian embassy in Libya were also abducted in Tripoli, on March 21 and April 17 respectively. According to Tunis, their captors demanded the release of two Libyans held for “terrorism” in Tunisia.