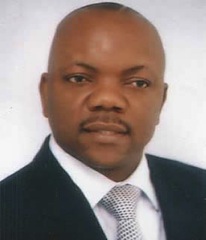 The Economic and Financial Crimes Commission, EFCC, Thursday arraigned the former Commissioner for Youth and Sports in Anambra State, Mr. Okey Aroh before an Ikeja High Court over an alleged N108 million theft.

Aroh was charged alongside Abimbola Oluwaniyi, for allegedly conniving to steal the amount, belonging to an old generation bank between June 2008 and July 2009.

The duo were  specifically arraigned for stealing, forgery and altering before Justice Oluwatoyin Ipaye.

Counsel to EFCC, Mr Omeiza Adebola, alleged that Aroh committed the offences while he was Oke Arin 2 branch of the bank

Adebola said that the ex-commissioner conspired with Oluwaniyi who was the Relationship Manager of the bank, to steal the money.

According to him, the defendants forged the bank’s certificates of deposit to facilitate the theft.

The two defendants, however, pleaded not guilty to the charge and were granted bail in separate terms.

Justice Ipaye ordered that the defendants be remanded in prison custody pending when they are able to meet their bail conditions.

She adjourned the matter till 3, 8 and 11 July for trial.