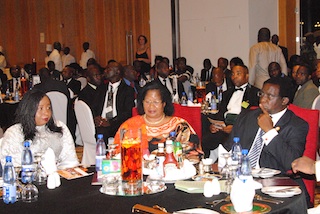 This year’s event which will attract a galaxy of celebrities and stars in the African movie industry, especially Nollywood, promises to be exciting and superlative as ever.

Mrs. Ebizi Ndiomu Brown, Director General, Bayelsa State Tourism Development Agency said the awards this year will be unique and special in several ways because the agency intends to use the occasion to showcase the rich cultural heritage and promote the tourism and investment opportunities in the state.

“This is the tenth year Bayelsa State is hosting AMAA, and that means we will go the extra mile to ensure that we put together a grand ceremony which will remain a reference point in the entertainment industry in Nigeria,” Brown said.

Brown also reiterated the fact that this year’s event is being bankrolled by the public sector and some public-spirited individuals who share in the vision of Governor Henry Seriake Dickson in transforming Bayelsa State into the tourism haven of Africa.

The AMAA awards ceremony which has been dubbed Africa’s version of America’s Academy Awards is the most authentic and widely acclaimed award on the African continent. It brings together a kaleidoscope of movie producers and other practitioners from across the globe to interface and share ideas and celebrate excellence annually.