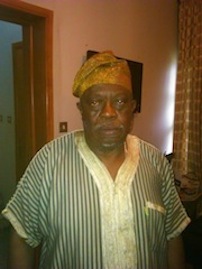 Oba Rilwan Akiolu’s endorsement of Akinwunmi Ambode as Governor Babatunde Fashola’s successor in Lagos State, has stirred a political storm, with a leader of the All Progressives Congress (APC) chieftain, Alhaji Ganiyu Kolajo Oseni, urging him to keep off politics.

Oseni in an interview today told the Lagos monarch that he has no right to dabble into politics, being a public servant paid by the tax payers of the state.

“All Obas are public officers because the government is paying their salaries. They are precluded from dabbling into political matters which affect the tax payers”, he said.

Oseni had earlier warned against the imposition of any candidate in the race for the governorship position of Lagos State in 2015, reminding the party of the late Femi Agbalajobi/Dapo Sarumi saga which produced an opposition candidate, the late Sir Michael Otedola as the democratically elected governor of the state in 1991.

Oseni during an interview with P.M. NEWS at his Osborne Offshore, Ikoyi, Lagos residence, said, “it’s very hallucinating, agonising, painful and very shameful for anybody to have made the categorical pronouncement that we must have a Christian governor”.

He said in an interview on Wednesday, hours before Oba Rilwan Akiolu endorsed Mr. Akinwunmi Ambode, an accountant at the public presentation of Ambode’s biography, ‘The Act of Selfless Service’.

“You people know me well that I do not hide my feelings on where I stand on issues. We the royal fathers have consulted widely within the state with the sons and daughters of Lagos and have come to the conclusion that the best person to take over from Mr. Babatunde Raji Fashola, the iconic governor of Lagos State is Mr Akinwunmi Ambode.”

“We cannot have a man like this and allow somebody whose father is an Oba in Ewekoro Ogun State be the Governor of Lagos. Although Lagos State belongs to all Nigerians and the state will continue to offer opportunities to every Nigerian to actualize the Nigerian dream, Ambode remains the best man with the required pedigree and character to take Lagos to the next level,” he said.

Akiolu stated that he has the constitutional right to endorse anybody he adjudged as the right candidate for the position as it was done in other climes, saying this was what he has done by endorsing Ambode, as a man who stood on a pedestal of integrity and selfless service above all others, to lead the Lagos of today to higher heights tomorrow.

Political pundits say that Ambode, a Christian is being allegedly favoured to succeed Fashola, on the grounds of his religion. Both Asiwaju Bola Tinubu, the former governor and incumbent Raji Fashola, are Muslims.

Oba Akiolu did not also shut the door against all the other aspirants, as he stated that the political parties have their procedure for picking their torch bearers.

A position Oseni agrees with. He called for a level playing ground for the aspirants. He gave the assurance that whoever emerged the party’s candidate in the primary will be supported as its torch bearer at the polls.

He noted that there is no superman in politics, adding that what is currently going on in the state are political shenanigans, tricks and manipulations.

“There is a clear cut difference between the church and the state. Can anybody go to Abia, Imo, Anambra, Rivers, Akwa Ibom and Cross River states and say they want a Muslim candidate? Democracy is a government of the people by the people and for the people. You can’t go to Zamfara, Katsina, Kano and Jigawa states and say you must have a Christian governor,” he asserted.

“I am very, very, very disturbed that people are bringing religion into politics. They know the beginning of the issues but nobody knows the end. Deep down in me, I don’t believe in imposition. The choice must be for the people.