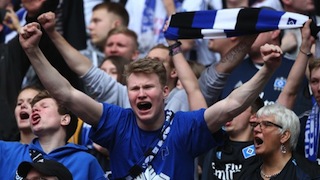 Hamburg avoided being relegated from the top flight of the German Bundesliga for the first time in their history after winning a play-off against Greuther Fuerth on away goals on Sunday.

The first leg on Thursday between Hamburg — who finished third bottom in the top flight — and the second tier’s third-placed side Fuerth was a goalless draw, and Sunday’s return at the Trolli Arena ended 1-1.

Pierre-Michel Lasogga crucially gave Mirko Slomka’s side a 14th-minute lead in Bavaria, before Stephan Fuerstner equalised for Fuerth just before the hour.

However, the home side could not find a winner and Hamburg hung on to survive as a top-flight side.

The 1983 European champions will therefore remain the only club to have participated in the top flight in every season since the inauguration of the Bundesliga in 1963.