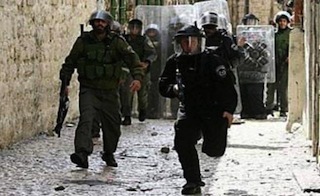 Israel’s top police officer on Sunday vowed that Jewish extremists would not be allowed to spoil the upcoming visit of Pope Francis by vandalising Christian holy places.

Speaking to reporters in Jerusalem, Police Commissioner Yohanan Danino said a group of “extreme elements” were attempting “to create pressure and the impression of pressure” ahead of the pontiff’s visit, which begins on May 25.

“There have been attempts here – principally as we get closer to the visit itself – by some extremists to try and make a provocation, and create a bad atmosphere before the visit,” he said.

“We have absolutely no intention of tolerating this,” he said.

Israel has been struggling to contain a wave of so-called “price tag” hate crimes by Jewish extremists targeting Palestinian and Arab property, which has included an increasing number of vandalism attacks on mosques and churches.

Although police have made scores of arrests, there have been no successful prosecutions, prompting widespread expressions of concern from Christian leaders.

“We will do everything to ensure they won’t harm Christian holy places… and to ensure the trip goes successfully,” said Danino.

He said there had been “no concrete information” about threats to the papal pilgrimage but that police were “not taking any chances”.

Last week, Latin Patriarch Fuad Twal, head of the Roman Catholic church in the Holy Land, warned that hate crimes targeting Muslims and Christians was poisoning the atmosphere ahead of the pope’s visit, with church officials “very concerned” about the lack of security.

But Papal Nuncio Archbishop Giuseppe Lazzarotto played down concerns the visit could be spoilt by a handful of extremists, saying the numbers of those involved was “very limited.”

“We know that this happens but we should not over-estimate them, or give them more importance than they have, because we know that the majority of the Israeli people are happy that the Holy Father is coming,” he told reporters.

He said Pope Francis was coming to bring a powerful message about coexistence without fear.

“He doesn’t want to use an armoured car, do you know why? Because he says that it would be a very bad message for the people: ‘I need an armoured car because I am afraid of you.’

“The pope is not afraid of anyone. He comes to preach, to announce and ask for peace, understanding and collaboration, living together peacefully.”

The pope will begin his trip in Jordan on May 24, travelling to the West Bank town of Bethlehem the next morning. Later that day, he travels to Jerusalem where he will stay until the evening of May 26.

His brief stay was being treated by Israel police with the same level of importance as the 2012 visit of US President Barack Obama, the police commissioner said.

“You cannot exaggerate the importance of this visit on both a national and an international level,” he told reporters, saying an extra 8,000 police officers would be deployed throughout Jerusalem for the duration of the visit.

“This is a historic visit from his point of view, it is the first official visit outside the Vatican and he chose it to be here in Israel, and we will do everything to make it a success,” he said.