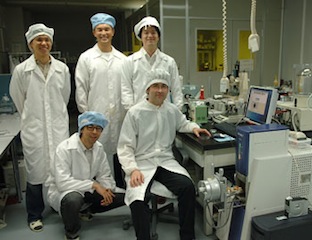 Some researchers at the University of Tokyo

By 2020 the group, which includes the University of Tokyo and Waseda University, plans to develop technology which can cut diesel engine carbon-dioxide emissions by 30 per cent from 2010 levels.

The manufacturers plan to adapt the technology for commercial use in both diesel and gasoline-powered vehicles, the Nikkei said, hoping to gain a leg up over European carmakers as well as helping to meet tightening environmental regulations around the world.

Japanese carmakers long held the advantage in low-emission and fuel-efficient engines, but German giants BMW and Volkswagen are seen as having caught up in recent years, particularly in diesel engine development.

The project is forecast to cost about two billion yen ($19.7 million) in its first three years from the current fiscal year which started on April 1, Nikkei said, with the Japanese government set to subsidise two-thirds of the first year costs.

Despite growing demand for electric vehicles, internal combustion engines are expected to remain the main source of power for cars for the time being.

Conventional combustion-powered vehicles are estimated to account for 89 percent of cars produced worldwide in 2030, according to a survey by the thinktank Fuji Keizai Group.