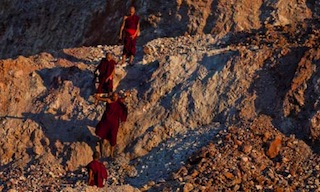 Protesting monks at Letpadaung mine

Two Chinese men working at a controversial China-backed copper mine in Myanmar have been kidnapped by activists and monks who have threatened to kill them, the firm behind the project said Monday.

China’s Wanbao, which operates the Letpadaung mine in the town of Monywa, northwestern Myanmar, said activists were holding the two 23-year old contractors and demanding the “total halting” of the project, which has triggered fierce opposition from local villagers.

“Wanbao vehemently condemns this unprovoked attack on our colleagues,” said the firm in a statement, calling for the immediate release of the men, who were surveying a southern area of the mine project when they were set upon by activists and two local monks on Sunday.

The statement said the activists, who claimed to be from a group called the “Student Network of Mandalay”, had issued a number of demands and threats.

A spokesman for the company and local officials contacted by AFP confirmed the incident.

“We strongly urge that our two colleagues be released soon,” said Wanbao official Cao Densheng, adding that the company had asked for help from authorities in Sagaing Division, northwestern Myanmar.

The mine has met with virulent protest from campaigners and local villagers who have raised concerned about its environmental impact and land-grabbing.