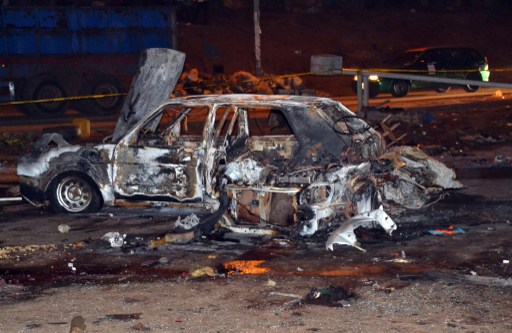 Twin car bombings killed 46 people on Tuesday at a crowded market in the central Nigerian city of Jos, as emergency workers struggled to contain a raging fire, officials said.

“For now, we can authoritatively confirm that 46 people were killed in the blasts while 45 people were seriously injured,” said Chris Olakpe, the police commissioner in Plateau state.

“The place has been cordoned off. Nobody should go there until we finish sweeping the place tomorrow (Wednesday).”

The first blast exploded from within a truck at roughly 3:00 pm (1400 GMT), with rescue teams rushing to the city’s New Abuja Market, the military said.

The second bomb came from a minibus some 20 minutes later and witnesses reported that many of the emergency workers were caught up in the second blast.

Boko Haram Islamists are widely believed to have active cells in Jos and have attacked the city before, but the area has not been heavily affected by the extremist uprising.

The group claimed a July 2012 attack at a funeral outside the city that targeted mourners and the security services.

Plateau state, which falls on the dividing line between Nigeria’s mainly Christian South and mostly Muslim north, has however seen waves of sectarian violence that has killed thousands over the last decade.

“What we are doing now is (trying) to evacuate the dead bodies… many of them are burnt beyond recognition,” said Mohammed Abdulsalam, are coordinator for the National Emergency Management Agency (NEMA).

“The fire is still raging. Many shops are consumed by the inferno,” he said.

Kingsley Egbo of special military unit deployed in Plateau said rescue workers and the security services were struggling to control the crowd amid the chaos.

The bombings follow two separate attacks on the same bus station in a suburb of the capital, Abuja, on April 14 and May 1, that killed more than 90 people. The first was claimed by Boko Haram.

Four people were also killed on Sunday in a suicide car bomb attack in a predominantly Christian area of the northern city of Kano that had been previously targeted by the group.