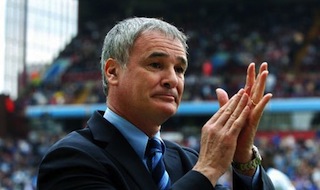 The 62-year old former Chelsea coach took charge at the Stade Louis II in May 2012, leading them to promotion back to the top flight last season, and had a year left to run on his contract.

Principality side Monaco finished runners-up to Paris Saint-Germain in Ligue 1 this season, qualifying them for the Champions League.

“I can confirm the departure of Claudio Ranieri. We have taken the decision to part ways,” Vasilyev told a press conference.

“I would like to acknowledge the very good job that Ranieri has done.”

The Italian was recruited in May 2012 after the club was rescued from the point of bankruptcy by Russian billionaire Dmitry Rybolovlev.

He returned the club to Ligue 1 and a spending spree in the past 12 months saw the arrival of Radamel Falcao, James Rodriguez, Eric Abidal and Joao Moutinho.

Despite guiding Monaco to second place, nine points behind PSG, Ranieri’s future had however been the subject of growing speculation.

“It was a difficult decision,” Vasilyev added. “It’s never easy when the results are good. But we believe that at this stage of the project we need to find a new dynamic.

“We didn’t share the same vision of the club’s development. We need new ideas to build and develop our club. We’re in for the long haul, there’s a vision for development.”

According to media reports, Monaco are in talks with Portuguese coach Leonardo Jardim, 39, who is currently at the helm of Sporting Lisbon.

But Vasilyev would not confirm the name of the new coach until certain details had been ironed out.

Vasilyev added: “I cannot confirm the name of the new coach while the details are still being sorted.

“We are looking for a modern coach who can bring new methods, who has a vision has an attacking philosophy and who can create a good show for our supporters.”

“It’s secondary for us if the coach is well-known or not.”

Ranieri had one year to run on his contract, but Saturday’s 1-1 draw against Bordeaux on the final day of the season proved to be his last game in charge.