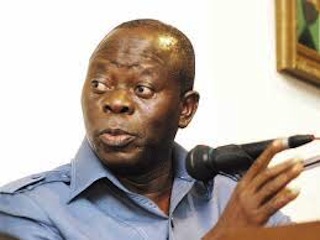 Governor Adams Oshiomhole of Edo State says he will not be intimidated to surrender the resources of the state to service private individuals who do not have the interest of the people at heart, saying his Government will work for the masses and not for godfathers.

Speaking at the inspection of the on-going Storm Water Masterplan Project in Benin city Wednesday, Oshiomhole said he wished those who have defected from the party “safe journey” to their new destination.

“I am aware that some people have left our party. We wish them safe journey. When I came, I was clear and I said we will work for the people of the state. I did not say I was going to work for individuals.

“I know that many people were deceived and they are already returning because they were told to come for a meeting only to see people carry microphone saying they are resigning from the party. We will not decamp. We will continue to do what God asked us to do and I know that the people of Egor will continue to support me. In the last election, I got 96 per cent in this Local Government.

“I know that the more we work, the more benefits people will see, because we are still going to build more schools, the construction work will continue, we will deliver more transformers.

The Governor reaffirmed his commitment to aggressive urban renewal in the state, saying “when we came out to ask for your votes in 2007, I did make the point that the problem of Benin City is not beyond solution and that the problem of flooding, that make people to be afraid whenever the rain is threatening is not an act of God but a result of many years of neglect by various governments.

“I said I am not coming to Edo to lament but that I am coming to Edo to fix it, and the lay foundation for the future. As you can see, we are right now standing on a huge underground drainage which is part of the Benin City Water Storm MasterPlan that every water that drains from this area gets into the underground drainage and it will take it to the river; so that the problem of this community is solved forever.

“The most difficult part has now been completed. You have seen the side drains that they are doing, when we finish it, this place we are standing will be asphalted. So you will be driving on it and will not know that you are driving on top an underground measuring about 40feet deep and 20 -30 feet wide.”

Residents of the community who trooped out in their large numbers expressed joy at road at Igbinaduwa and other areas in the area and the flood and erosion control measures put in place by the Governor.

The Ailefoba of Benin Kingdom, Chief Jonathan Idada Erinwioghae commended the Governor for his good works. He promised that the people will continue to support all his laudable projects.

A resident of the area, Edo Aguebor said, “We are making history today, the comrade governor, the performer is in our midst.

“Since we entered this community for the past 30years, we have experienced serious problems of erosion to the extent that many were driven from their homes but as you can see today, our roads are now accessible, we can easily get to our various homes and the problem of erosion is now a thing of the past.”

Mr. Emma Iyase and the Mrs. Esther Obanor both of whom eulogised the governor promising to support the APC in future elections in the state.