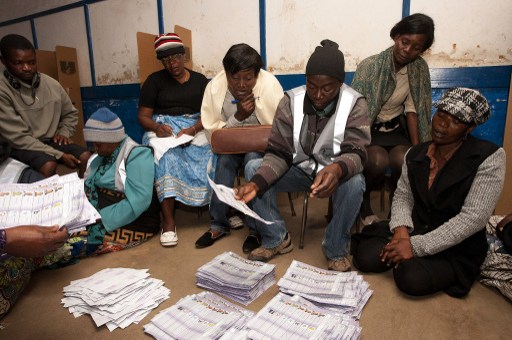 Malawi election officials have had to resort to fax and email to tally votes from this week’s election after the electronic system broke down, delaying the release of any results, the chief elections officer said Thursday.

The system “is refusing to take the information from the ground where our data clerks are stationed to send the results,” chief elections officer Willie Kalonga told AFP two days after the vote.

As a “back-up solution,” officials in the southern African country’s 28 districts were sending the results manually via fax and email to the national elections centre in Blantyre.


The Malawi Electoral Commission (MEC) has not yet released any preliminary results after Tuesday’s tight-run polls, which pit incumbent Joyce Banda against her rival and predecessor’s brother Peter Mutharika.

The military was deployed to restore calm after irate voters set alight voting stations when election materials were unavailable and some bureaus opened 10 hours late.

Voting spilled into an unscheduled second day Wednesday at 13 voting stations, and thousands queued to cast their ballot.

Around 7.5 million people were eligible to vote in the fifth democratic elections since the end of dictatorship 20 years ago.

The MEC will only announce results when 30 percent of the votes have been counted, and is currently “not anywhere in the neighbourhood” of that figure, MEC chairman Maxon Mbendera said Wednesday.