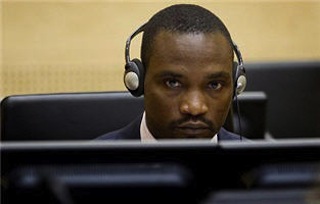 Germain Katanga during his trial at the International Criminal Court

The International Criminal Court on Friday sentenced Congolese warlord Germain Katanga to 12 years in jail for arming an ethnic militia that carried out a “particularly cruel” 2003 village massacre.

“The chamber sentences Germain Katanga to 12 years in prison,” presiding Judge Bruno Cotte told the Hague-based court in its second sentencing since opening in 2003.

The almost seven years that Katanga has already spend in detention will be deducted from the sentence, he said.

Katanga, 36, was convicted in March of war crimes and crimes against humanity including murder and pillaging for his role in the attack on Bogoro village in the volatile eastern Democratic Republic of Congo on February 24, 2003.

Judges found that he armed fighters of the Patriotic Resistance Forces in Ituri (FRPI) who carried out the village massacre in which more than 200 people died.

“The scars of the fighting that occurred that day are still be seen today,” Judge Cotte said on Friday.

The use of machetes in the attack was “particularly cruel and caused extreme suffering”, Cotte added.

The ICC however cleared Katanga of charges of rape, sexual slavery and using child soldiers.

Katanga’s lawyers have appealed his conviction and now have another 30 days to appeal the sentencing.

The decision on the conviction’s appeal is still pending.

The sentencing is court’s second since opening its doors in 2003, with another Congolese warlord and Katanga’s one-time adversary Thomas Lubanga sentenced to 14 years in July 2012.