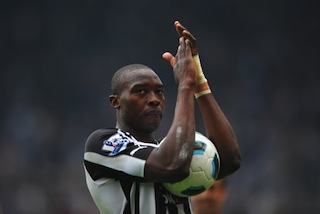 Shola Ameobi in Newcastle jersey: back in Barclays Premier League

Nigeria striker Shola Ameobi is to leave Newcastle after 14 years with the Premier League club.

Ameobi’s current contract expires imminently and after discussions with Magpies boss Alan Pardew, he has decided to bring down the curtain on his long spell at St James’ Park.

The 32-year-old was handed his senior debut by Bobby Robson as a teenager, but often struggled to establish himself in the starting line-up, with a succession of managers preferring to use their own signings instead of the youth team product.

Ameobi, whose younger brother Sammy remains a member of Newcastle’s squad, made 397 senior appearances, 178 of them as a substitute, and scored 79 goals.

His final appearance was memorable for all the wrong reasons as he was sent off by referee Phil Dowd after earning two bookings for dissent in space of a minute in the second half of his side’s 2-1 defeat at Liverpool.

“Following discussions with Newcastle United, both parties felt it was the right time for us to part company,” Ameobi said.

“I have been at Newcastle United all my career and I have enjoyed every moment and always worn the famous shirt with pride. I am now looking forward to starting a new chapter in my career.

“I would like to place on record a big thank you to everyone at Newcastle United. I wish the club great success in the future and I’m sure with the team and management they have, Newcastle United will go from strength to strength.

“Finally, a big thank you to the supporters who have always been fantastic.”