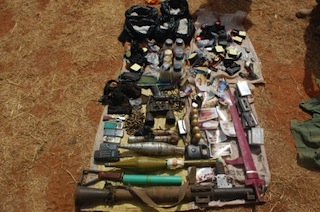 This information was contained in a statement issued and signed by Major-General Chris Olukolade, Director of Defence Information.

The statement said that cordon and search exercise led to the discovery of the facility.

It explained that the discovery followed the arrest of a prominent member of the terrorist group.

“Locally made anti-aircraft gun and mortar accessories and rocket propelled grenade tubes and launcher along with accessories were recovered.

“Also seized were three AK47 rifles and hundreds of rounds of assorted ammunitions as well as drilling machines and other fabricating equipment.

The statement reminded the public to report suspicious persons to security agencies in their localities to prevent unwholesome act by terrorists.