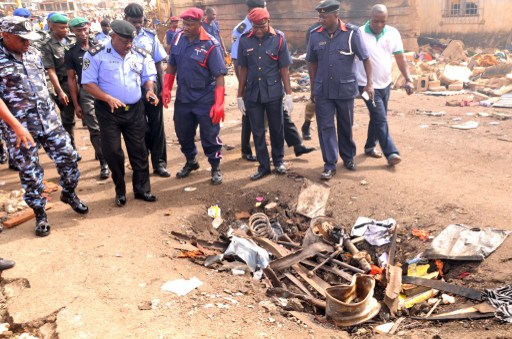 State police officials inspect wreckage of burnt vehicles at the scene of twin bomb blast at terminus market in the central city of Jos on May 21, 2014.

An explosion that killed at least three people in the central city of Jos was hidden in a car, police said on Sunday, as an investigation opened into the second deadly blast within a week.

“It was a vehicle-borne IED (improvised explosive device),” said Chris Olakpe, the commissioner of police for Plateau state, of which Jos is the capital.

“The death toll so far is three. That includes the bomber,” he told AFP but did not say whether the explosion, which happened at about 9:30 pm (2030 GMT) on Saturday, was an attempted suicide attack.

At least three people were injured, he added.

Manzo Ezekiel, spokesman for the National Emergency Management Agency (NEMA), said the explosion was of a lower intensity than Tuesday’s twin car bomb attack in Jos, which killed at least 118.

The scene of the explosion near a so-called “viewing centre” showing Saturday evening’s European Champions League football final between Real Madrid and Atletico Madrid, was cordoned off.

Police and the military have stepped up patrols.

Olakpe and the Plateau state governor’s office said after the blast that the target was the viewing centre but the explosives detonated prematurely.

There was no immediate indication of who was responsible for the explosion but Boko Haram Islamists have previously targeted football fans watching matches at big screen venues before.

The group, which is waging an increasingly deadly insurgency in Nigeria’s north and last month kidnapped more than 200 schoolgirls, triggering global outrage, is suspected of carrying out Tuesday’s attack in Jos.

Home-made bombs were hidden in a minibus and a truck and went off within 20 minutes of each other in the crowded New Abuja Market area of the city.