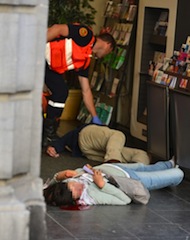 An emergency response worker checks the bodies of two victims of a shooting at a Jewish Museum in Brussels, on May 24, 2014

Two of the three people shot dead in an attack on the Jewish museum in Brussels were Israeli tourists, a spokesman for the Israeli foreign ministry said on Sunday.

“An Israeli couple in their 50s from Tel Aviv, who were visiting Brussels as tourists, were among the victims,” Yigal Palmor told AFP, in reference to the deadly attack in the Belgian capital on Saturday.

“We have confidence in the Belgian authorities, in the justice system and the police to look into this horrible crime,” he said.

Three people were killed and one was critically wounded when a gunman attacked the Jewish Museum in central Brussels on Saturday afternoon in an apparently anti-Semitic act that shocked the country.

The attack drew condemnation from top European officials as well as from Israel Prime Minister Benjamin Netanyahu, who said it was “the result of constant incitement against Jews and their state”.

Israel’s Foreign Minister Avigdor Lieberman also blamed “anti-Israeli and anti-Semitic incitement expressed in calls to boycott Israeli produce” in a clear reference to a Palestinian-led campaign to boycott products from Israeli settlements that has taken root in Europe.

Belgium Interior Minister Joelle Milquet on Saturday said it was too early to determine whether it was an anti-Semitic attack, but given the target “there are strong grounds for presuming so”.

It was the first fatal attack on a Belgian Jewish centre since the early 1980s in a country which is home to 40,000 Jews, roughly half of whom live in the capital.