Chukwurah, Ozokwo, others shine at AMAA 2014 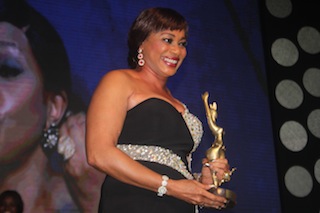 Clarion Chukwurah on the big stage with her award

It was a night of glory for one of Nigeria’s seasoned actresses, Clarion Chukwurah, as she emerged the best actress on the continent at the 2014 edition of the Africa Movie Academy Awards, AMAA held on 24 May in Yenagoa, Bayelsa State.

At the ceremony held inside Dr Gabriel Okwara Hall in the oil rich state capital, Chukwurah clinched the ‘AMAA 2014 Award For Best Actress In A Leading Role’ for her outstanding performance in the movie, ‘Apaye’.

Chukwurah did not enjoy the spotlight alone. Patience Ozokwo also shone at the award ceremony. The ageless actress emerged winner in the category of Best Actress In A Supporting Role for her role in the movie “After The Proposal”.

Apart from these two big wins, Nigeria also recorded achievement in Best Documentary (Portraits of a Lone Farmer); Best Film In African Language (B For Boy); Achievement In Soundtrack (Onye Ozi); Achievement In Visual Effect (A Mile From Home) and Award For Best Nigerian Film (Accident)
Bob Manuel Udokwu, seasoned actor and now, a top aide to Governor Willie Obiano of Anambra State, was the recipient of the AMAA Special Jury honour.

He was recognised for his more than two decades contribution to the movie industry in Nigeria and Africa.

But in all, it was South Africa that dominated the award ceremony as the country scooped ten awards including the biggest award of the night, AMAA 2014 Award For Best Film (Of Good Report)

Ghana’s Shirley Frimpong Manso’s “Potomanto”, won the award for Achievement in Editing, while “Northern Affair”, a Leila Djansi film made it a double for Ghana by clinching the Achievement In Production Design category award.

Henry Seriake Dickson, Bayelsa state governor, represented by his deputy, Rear Admiral John Jonah (retd.), said it was a great joy for the state to be part of the extraordinary journey of AMAA from the onset which has grown from its humble beginning to become the premier awards ceremony of the movie industry in Africa.

Peace Anyiam Osigwe, founder and CEO of the awards, during her opening remarks, paid a glowing tribute to late Amaka Igwe, who was a member of AMAA Jury till her death.

She said after 10 years, AMAA has become the platform that projects the African film industry to Africa and the rest of the world.

“This is a celebration of African heritage and culture, and reaching our tenth anniversary is without doubt a testimony to resilience of human spirit and determination,” said Anyiam Osigwe, who has stepped down as the chief executive of the awards.

She then called on African filmmakers to shun the ‘cabalism’ that currently exist among them on the continent to sustain the momentum.