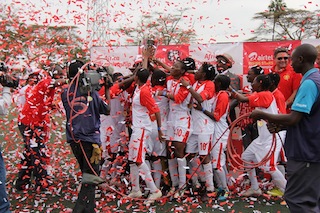 Following strings of success stories, Airtel Rising Stars U-17 football tournament has stirred up enormous anticipation within Nigerian youths and parents, as Season Four of the football programme kicks off.

Talented teenage footballers from different parts of the country keen on participating in the annual grassroots football show, which has fast risen to become the largest football competition in the country now have a chance.

Already, select Airtel showrooms nationwide have started attracting high foot traffic as youngsters have begun to storm the contact centres to request for registration forms for the 2014 edition of the ARS football competition.

“My daughter, a goal keeper, has been requesting that I obtain the ARS 4registration form for her. Although she is still in Senior Secondary School 2, she is confident that she will make a difference and emerge one of the Most Valuable Players (MVPs) in the 2014 edition of the competition. I am just waiting for a formal announcement to obtain the form for her, he said.

Also, Mudiagha Oghenero, 15, has formally written Airtel to express his readiness to participate in the ARS 2014. In a letter addressed to the Director of Corporate Communications & CSR, Airtel Nigeria, Oghenero requested for guidance in obtaining and completing the registration form.

The Airtel Rising Stars (ARS) U-17 Football Championship was launched in 2011 by leading telecommunications operator, Airtel Nigeria, to provide a platform for the discovery and nurturing of talented male and female youngsters.

Since its debut, ARS has played itself into the hearts of soccer-loving Nigerians with the discovery of some budding talents who have gone on to bring honour to their families, communities and the nation at large.

Prominent among these are the trio of Musa Mohammed Shehu, Al-Hassan Ibrahim Abdullahi and Zahradden Bello all of whom were members of the Golden Eaglets team who won the last FIFA U-17 Championship held in the United Arab Emirates.

It would also be recalled that the six most outstanding players from the 2013 National Championship held in Lagos returned from Rwanda after a week-long football clinic with Coaches from Arsenal FC of England.

Meanwhile, plans have been concluded for the take-off of Season Four with registration commencing soon. This will be heralded by a formal launch in Lagos.

The Airtel Rising Stars U-17 Championship for boys and girls is a pan-African soccer talent initiative of Airtel Africa that is focused on identifying and nurturing soccer talent from the grassroots onto limelight.

Touted as the biggest tournament in the continent, the Airtel Rising Stars attracted over 18,000 youth teams and 324,000 youth players across 16 countries during the season 3.

In addition to galvanising the biggest turnout during the championship stages, the program has also broken new ground by introducing girls to a pan-African tournament.