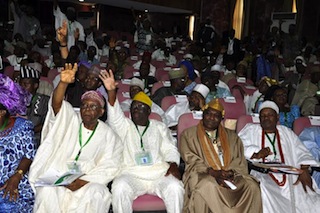 In the file: Delegates at the National Conference

Delegates at the National Conference disagreed with a clause in the recommendations of it’s Standing Committee on Religion on Tuesday.

Akanmode had argued that since a recommendation by the committee that government should stop funding pilgrimage had been approved, there was no need to retain the boards any further.

He said that if the boards remained, government could still be sponsoring pilgrims “through the back doors”.

When the Deputy Chairman of the conference, Prof. Bolaji Akinyemi put it to voice vote, those who supported scrapping the boards had the day.

This, however, sharply divided the conference as those who supported the retention protested against the ruling.

They drew the attention of leadership to the Procedure Rule which states that any decision not reached by consensus shall be by 70 per cent vote.

However, others wanted the ruling on the issue to be sustained by Akinyemi, thereby throwing the conference into rowdiness and shouting by delegates.

Efforts by Akinyemi to restore order were rebuffed by both parties.

Consequently, the deputy chairman said the atmosphere was no longer conducive for the conference to proceed.

“The conference will rule on it tomorrow because we cannot continue in this rowdy atmosphere.

Amidst shouts of “no”, the deputy chairman asked Erelu Olusola Obada to move a motion for adjournment of the conference and he consequently adjourned until 9:00 a.m. on Wednesday.

Akinyemi had said the first pilgrims welfare board was established by Chief Obafemi Awolowo in the then Western Region.

He said Awolowo had argued that if citizens were going outside the country in group, government needed to look after them in their country of destination by providing them consular services.

However, supporters of the motion contended that government could coordinate activities of Nigerians travelling abroad by providing them with consular services through the Ministry of Foreign Affairs.

NAN reports that the conference had smoothly considered and adopted some recommendations of the report of the committee clause by clause before the contentious issue.