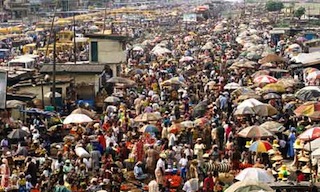 Nigeria’s consumer market is worth more than 400 billion US dollars, the McKinsey Global Institute (MGI) announced in its report released on Tuesday in Abuja.

The report entitled, “Nigeria’s renewal: Delivering Inclusive Growth in Africa’s Largest Economy”, said the value of Nigeria’s consumer market could reach 1.4 trillion dollars by 2030 with food and non-food consumer goods accounting for one trillion of the total.

It stated that one of the most important under-appreciated changes in Nigeria was the growing size and strength of its consuming class.

“While the middle income is 680 dollars per year and 43 per cent of the population lives below the poverty line, the number of households in the consuming class is growing rapidly.

“In 2013, an estimated eight million households had income of more than 7,500 dollars per year, the threshold which MGI considers as ’emerging consumers’.

“With sufficient income to meet all basic necessities and have money to start buying more and better food as well as health and education services,” the report said.

It stated that the labour productivity in the country had grown by 3.6 per cent per year since 2010 and had contributed to the greatest share of its Gross Domestic Product (GDP).

The report, however, stated that in spite the improvement in labour productivity, Nigeria was still far behind other major developing economies.

“At less than 9,500 dollars per worker per year, Nigerian output is 58 per cent less than the average of seven large developing economies.

“Nigeria also has a low ratio of employment to population of 31 per cent compared with 52 per cent in Brazil, 46 per cent in Indonesia and 48 per cent in Russia.

“Productivity is also being held back by poor infrastructure, which increases the cost of doing business in the country,” it said.

The report said that the oil and gas sector had many opportunities to improve productivity, adding however, that the large share of the economy that existed outside oil and gas was where the productivity gap to other countries emerged.

It explained that the recent rebasing exercise had demonstrated that the natural resources sector was a smaller share of the country’s economy.

The report further said that the rebasing had cleared the misconception by people outside Nigeria that believed the oil sector was the engine of growth in the Nigerian economy as it is with several Middle Eastern economies.